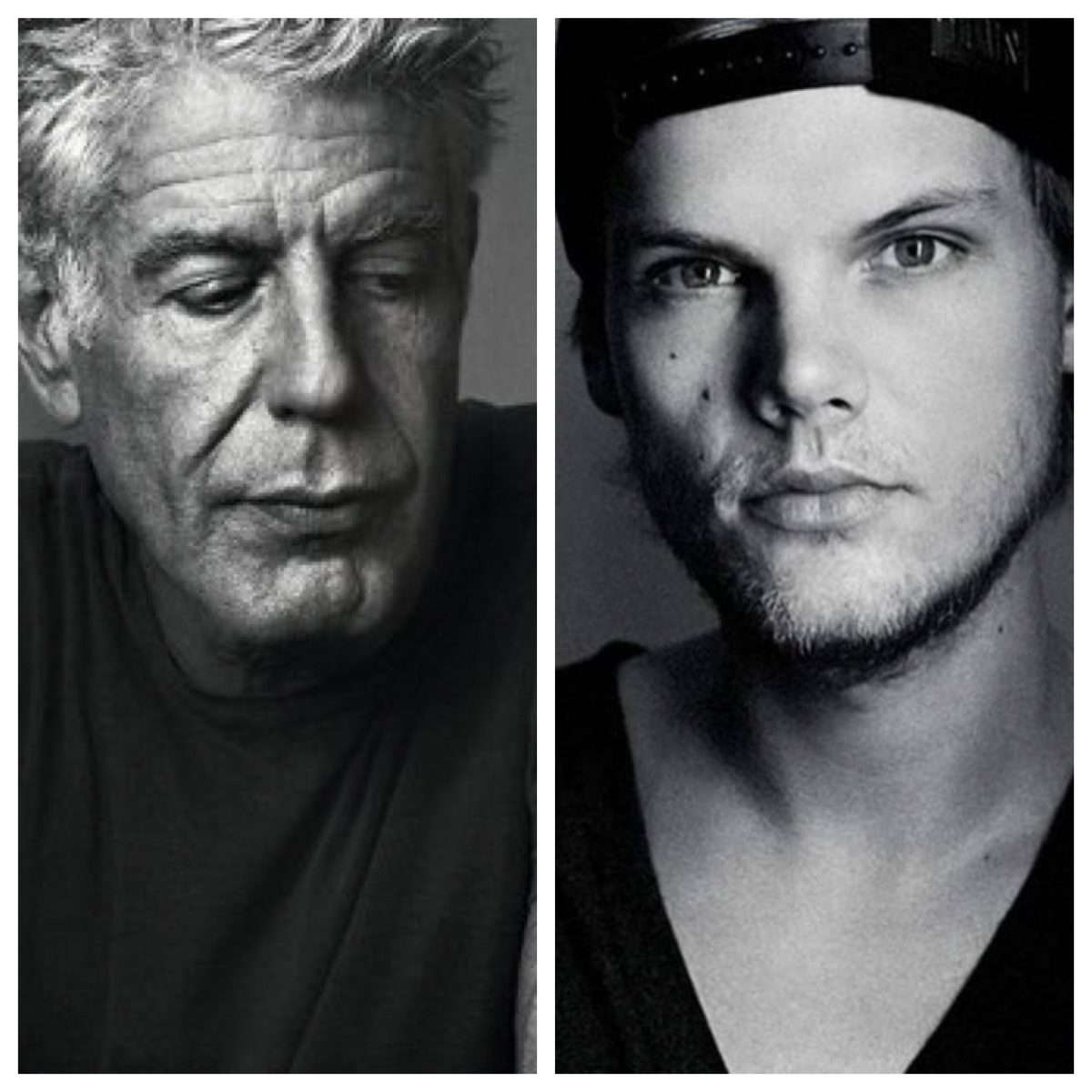 Like many people, it’s been hard for me to process all of the celebrity suicides of late. First it was Robin Williams, then Chester Bennington of the band Linkin Park. Then it was Prince (who was initially thought to have simply overdosed [1]; then it was Avicii – one of the wealthiest electronic dance music producers in history. Then it was designer Kate Spade. And now today, celebrity chef and travel show personality, Anthony Bourdain.

Of course, both Avicci and Bourdain hit home for me. For years, I’ve told people: “I’m a senior pastor who secretly wants to be both Avicii and Bourdain.” In fact, my wife has easily heard me say that over a hundred times. Honestly, much of our Variant concert this week was inspired by Avicii. And with all the documentaries we’re working on, I’ve constantly told people: Watch Bourdain and you’ll see what I’m aiming at.

So, as you’d imagine, this month has really caused me to pause.

But, honestly, I’m actually quite disturbed by the way our country is processing suicide. As the web buzzes with questionable tributes and simplistic remedies, I can’t help but feel like it’s time we get a bit smarter about all of this.

In fact, here are 3 things you probably didn’t know about suicide – and they just might change how you process these sad events.

(1). Celebrity Suicides generally Boost the Suicide Rate Significantly – After Robin Williams committed suicide, researchers noted a strange and dramatic boost in suicides. Over the four months following, an additional 500/month (2000 additional deaths) were recorded above the average [2]. And sadly this is a well-documented phenomenon called “copy-cat” suicides [3]. Quite simply, when celebrities kill themselves, hundreds and even thousands follow suit – especially those who are demographically similar to the celebrities who’ve killed themselves.[4] But why? Why would celebrity suicides dramatically increase deaths a thousand-fold rather than prevent them?

Some theorize it’s because, pop-culture tends to celebrate and enshrine their suicidal icons. When a celebrity commits suicide, global media will erupt with love, with compassion, with romantic looking tributes. And to a person who’s struggling with depression, the idea of being celebrated like this can sound appealing.

However, I can totally understand why celebrities like Val Kilmer went on a long angry rant about Anthony Bourdain being selfish today [5]. Because, not only will Bourdain’s actions boost suicides globally, but, it will cause his family to spend the rest of their lives sorting through guilt and shame.

And how do I know? Because my wife found her father’s body after he committed suicide one night.

For years, my wife second guessed herself: “Why did I confront my Dad the week before? …Why didn’t I ask better questions?” In many ways, suicide causes the survivors to struggle with an endless list of emotions ranging from rejection to shame. As my wife has often told me: “I never knew what shame was until my Dad killed himself. You walk around with a feeling like you’re toxic and dysfunctional.”

But my point is this: Maybe Val Kilmer is right. Perhaps our well-intentioned tributes are sending all the wrong messages… and perhaps we’re inadvertently covering over the selfish and abusive consequences it has on the people who survive this.

“Yeah, but Peter… it’s not like suicidal people can help it. After all, they’re ill.” And Yes. I agree to a certain extent – especially when you’re talking about teenagers and war veterans. As you’ll see in fact #3, there are complicated physiological factors that increase the risk.

But I’m also still convinced, Suicide is always a choice, not a necessity: “No temptation has overtaken you [including suicide] except that which is common to mankind. And God is faithful; he will not let you be tempted beyond what you can bear. But when you are tempted, he will also provide a way out so that you can endure it.” 1 Cor. 10:13 – In other words, there’s always a way of escape.

But what’s the way of escape? Well, for starters…

(2). People who Attend church are Significantly less likely to be Clinically Depressed and Commit suicide:
People who attend church regularly are 22% less likely to be clinically depressed [6]. At first, researchers thought: “Perhaps church provides supportive relationships?” – which it does; however, researchers found that church attendees have significantly lower risks of suicide than people who merely have great supportive friends. Quite simply, there’s something unique about church attendance. In fact, as I mentioned in my book Broken Escalators, people who serve in a weekly ministry at their local church rate themselves 7x’s happier than Christians who merely attend church or simply listen to podcasts.

But here’s the deal… Most people have never even been to a life-giving church. And even for people who have, when people struggle with depression, they often don’t even have the strength to make healthy decisions. So, they need to be relentlessly invited back into life.

So for those of you who don’t struggle with this, I encourage you: Constantly invite people into fellowship. Don’t take church attendance lightly.  And consider, what if you need to be at church to help someone who is hurting?

But lets be honest: for many people, there’s something deeper going on in their physical bodies that needs to be addressed – which leads to fact number three:

(3). Chemical imbalances have a Huge Effect on the Odds of Suicide: And how I know? Because I have one. Several years ago, I went through a terrible depression. Part of it was because, the church seemed to be going backwards for many years. Another part of it was because, I was having massive struggles with undiagnosed rheumatoid arthritis. Over time, I seemed to be slowly losing my ability to physically talk, swallow, and move my fingers. And despite spending 10’s of thousands of dollars on doctors and remedies — nothing was working. I literally spent several months questioning if I was even able to pastor anymore. It felt like every dream I ever had was dying.

Don’t get me wrong, I had gone through seasons where I had been depressed for 3 or 4 straight months; but, through vigorous meditation and fellowship, I was able to navigate it. However, I had never gone 3 straight years like that – where you struggle with crazy thoughts.

After watching the impact of suicide on my wife’s family, I vowed to never make that decision. But, amidst the chronic pain, I felt hopeless. And, I’m embarrassed to say that I literally prayed that God would take my life in some creative way for the better half of a month.

Aren’t you glad God doesn’t answer all of our prayers?

Looking back, it sounds extreme but, I’m just being honest. The constant pain was causing me to struggle with all sorts of weird thoughts that seemed impossible to uproot.

Of course, throughout that season, I was rushed to the hospital twice (thinking I was having a heart-attack); and, after the third time, a doctor put me on an anti-depressant thinking that I was probably struggling with physiological panic attacks induced by adrenaline stress and depression.

“Depression” I laughed?! “Doctor, I am not depressed!” And I started ranting about how I have amazing friends. “I even see a counsellor on a regular basis.” But then my doctor said something that set me free:

“Peter, you might not be depressed according to your definition; but, I’m purely talking about clinical depression. I’m simply saying that, some people’s bodies have a harder time producing or harnessing endorphins, serotonin and dopamine. And often, it has nothing to do with your lifestyle. It’s pure genetics.
And it’s a common problem in people who have anxiety attacks – which is what you’re probably having. Would you please just try it for a couple months?”

Of course, he told me: “It may take 6 weeks to work. But for some people, they feel a serotonin and/or dopamine boost immediately.” And sure enough, within 2 days of starting the medication, it was DRAMATIC! (like ALL CAPS!)… I vividly remember waking up to a strong dopamine rush – almost like I had an immediate 35% boost in sunshiny happy feelings.

At first I thought: “There’s no way that the anti-depressant could be working that fast! Surely, that’s the placebo effect – it’s my mind tricking me.” But, looking back, it’s quite clear that the medication was working; because, the side-effects kicked in at the exact same time (which, I’ll spare you those details haha : ) But, it suffices to say that, I was totally blown away by the difference it made!

I kept thinking: “Is this how everyone else feels all the time? Have I literally been missing this feeling for all these years?” In some ways, I almost felt stupid that I had gone so many decades without considering these life-changing medications before. And today, it’s almost weird for me to think about how dark my thoughts were during those years.

And here’s the deal: Medications are not the solutions for everyone. Sometimes, the problem is demonic… and no amount of anti-depressants is going to change it.

For example, in Mark chapter 9, we read about a suicidal boy who nobody could cure. Of course, when Jesus showed up, he cast out a demon and suddenly, everything was changed. And perhaps that’s why church attendees have a unique statistical resilience to depression.

You see, sometimes, it’s chemical; sometimes, it’s life-decisions; sometimes, it’s drugs, lust, and other destructive forms of self-medicating…But, keep in mind, there is a clear spiritual component to all this as well. The devil [a.k.a., the thief] comes to “steal, kill and destroy” (John 10:10), but Jesus says, “I have come that you might have life to the fullest.”

Now, keep in mind, I’m not trying to give simplistic formulas for depression. There’s a lot that’s contributing to this epidemic. But, we’ve got to fight this rash of suicides using something more than silly social media tributes and pithy one-liners telling people to reach out. We need the presence & wisdom of God. And we need friends who know how to drag us into the presence and wisdom of God when we don’t have the strength to do it ourselves.

But one thing is for sure: “God is our refuge and strength; an ever-present help in times of trouble” (Psm.46:1). Whether you struggle with depression or are a survivor of someone who has, don’t battle alone. Your best days are yet to come.

Also, for anyone wanting to privately reach out for yourself or on behalf of a loved one, my friend David Hoskins runs Honey Lake Clinic the largest, most highly accredited Christian Psychiatric Treatment Center in America. You can call him directly at (954) 536-9539‬.

[1] I realize some people say that Prince didn’t commit suicide; but, his toxicology report makes it close to impossible that a person could have accidentally taken that much fentanyl. (see: http://www.chicagotribune.com/entertainment/ct-prince-toxicology-report-20180326-story.html) Either way, it’s impossible to argue against the fact that he was depressed & using dangerous drugs to medicate – http://hollywoodlife.com/2016/06/22/prince-suicide-note-found-death-fentanyl-overdose/ – Ultimately, I realize that people want to protect his legacy; yet, when we live in denial of why he’s not with us, we certain aren’t helping those who are also struggling with similar situations.

[6] Researchers at the University of Saskatchewan found that the incidence of clinical depression was 22% lower among those who attended religious services at least once a month compared with those who never attend.