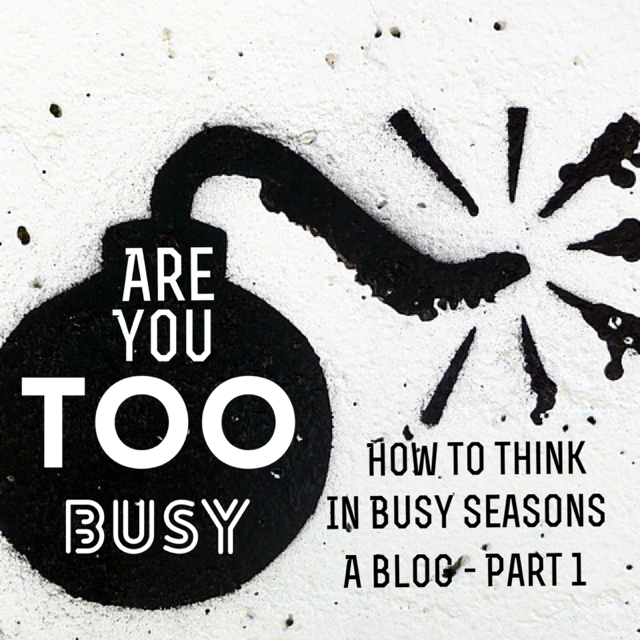 Are You TOO Busy? – How to Think in Busy Seasons – Part 1

Most people think that their busy pursuit of success is fine, until their lives melt down. I meet a lot of middle aged people who thought their marriage, kids, and physical bodies’ were fine (amidst the busyness of their careers) until all-of-a-sudden, they weren’t.

Your marriage falls apart; your kid does the unthinkable; or you lose your job and health in some rapid fashion. “How did I miss it?” – people often ask me AFTER the crash. Well, allow me to tell you about MY first crash. And perhaps you can avoid one altogether!

I had a lot of professional success early on in my life. Before Substance, I had the opportunity to become the senior pastor of a decent sized church in Wisconsin. I imagined that having a secretary (& all the other amenities of the senior pastorate) would make my life simpler; but, the exact opposite happened. Although I had 10 x’s the resources (compared to being a youth pastor), I also had 100 x’s the demands!
That’s why Myth #3 in my new book is called: “The Oversimplification Myth” – the false notion that Promotion will make our lives easier or happier. All I can remember from those days is the constant grind of writing another sermon. I gained 25 lbs in one year. And, when we added in 2 babies, I don’t think I ever saw my wife. There was always a big crisis or killer opportunity that needed to be seized. Not surprisingly, I finally had a huge breakdown moment.

Like a lot of people who lose perspective, I became totally depressed. Thankfully, I didn’t do anything to disqualify myself from ministry in that season; but, make no mistake, I was NOT healthy. I quickly realized that, success in one area of my life doesn’t compensate for failure in another. Professional success will never be a substitute for marital success, parenting success, physical success, or spiritual success.

For example, no one ever gets to the end of their life and says, “Gee, I wish I spent more time at the office.” So why do we allow singular areas of our lives to highjack the others? Quite simply: we often cheat towards the parts of our lives that bring us the most immediate accolades, results or gratification while the aspects of our lives that are harder to measure (like the state of our kids, marriage, etc.) often get procrastinated. After all, we often measure these other areas of our lives in yearly increments, not weeks or months. Because of this tendency to “borrow from the wrong areas”, King Solomon wrote an incredible Psalm to help us focus on the big picture. He wrote: “Unless the Lord builds the house, the builders labor in vain. Unless the Lord watches over the city, the guards stand watch in vain. 2 In vain you rise early and stay up late, toiling for food to eat— for he grants sleep to those he loves.” (Psalm 127:1-2).
Keep in mind, this was written by one of the wealthiest human beings on planet Earth. He had everything a person could ask for… And yet, he still had an impulse to strive. I think, this is a profound idea to meditate on. Professional success will never give you the peace you’re striving for. In the end, peace is not found in circumstances; rather, it’s found in submission to a generous Heavenly Father.
And if we would simply get in sync with God’s timeline for our lives, it would unload a massive amount of striving!
But then, Solomon transitions his Psalm in an interesting way: he immediately starts talking about children. And he says, “Children are a heritage from the Lord, offspring a reward from him. 4 Like arrows in the hands of a warrior are children born in one’s youth. 5 Blessed is the man whose quiver is full of them. They will not be put to shame when they contend with their opponents in court.”
For years, I never understood why these two ideas were related. One moment,he’s talking about “trusting in God” instead of striving; then next, he’s talking about family. What’s going on here?
I believe Solomon is trying to say, professional success will never compensate for family success. We can’t have a “One dimensional” metric for success or we will cease to be “blessed” with a true heritage – the things we’ll want most towards the end of our lives. For example, if you have kids, it’s critical you understand that the number 1 predictor of healthy child outcomes is “time spent with your kids.” More than parenting techniques, schools, lessons or social activities, great parenting boils down to simply “logging hours with your kids.”
And Solomon had a front row seat to his dad’s parenting disasters. (Just read 2 Samuel!) He saw that his dad paid a dear price for allowing his professional success to eclipse his family’s success. Thus, in many ways, Solomon is asking us to make sure we’re focusing on the fundamental priorities in our lives, such as “God First” “Family Second” … And then, allow God to work on building success in the other areas of our lives.
So, amidst your busyness, make sure to stop and take a holistic view of your life. You’re not merely an “employee.” You’re a Christian. You’re a human with a physical body. Some of you are spouses & parents too. What would success look like in each of those areas? What is God speaking to you about each of these areas? If you listen, this could become your greatest breakthrough. And here’s why:
As I share in Broken Escalators, when we prioritize holistic success, God releases special amounts of favor in those areas we’re scared to relinquish (Mt. 6:33). Quite often, the very reason why we’re NOT getting the professional success we pine after is because God knows, our lives will wobble over into catastrophic imbalance. And quite frankly, he loves you too much to bless your terrible priorities.
These thoughts have been especially helpful for me in my current season. With the launch of our new Northtown campus, I’ve had a steady barrage of concern: “Pastor, are you doing alright?” And it makes sense. The staff is grieving the loss of Pastor Rick’s wife, Crystal. On top of that, we’re feverishly prepping our new building for our launch Sunday this weekend. But thankfully, I’ve had enough big launches and grieving processes in my life to know: There will always be another “big event.” And I’ve got to move at the pace of my body and emotions, not external pressures. God creates solutions for our problems before we knew we even had problems.
Although I’m thrilled about moving into our new “big house,” I’m fully convinced, it’s ALL on God. And he’s got more than enough resources to pull this off.
But how about you? Do you have holistic success right now? Are you living at a pace where you can hear the Holy Spirit’s gentle nudges? Quite simply: If you’re willing to change your priorities, God is willing to take care of your long term success. Will you trust him to build your dreams?

P.s., If you’re in the Twin Cities, on Valentine’s Day, come celebrate the launch of our new Northtown Campus (off Central Ave/Old Hwy 10). Our new Kid’s Playland area is over-the-top : )