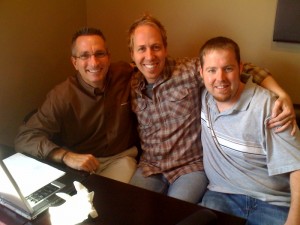 Does he really know what he's signed up for?

Every Fall ends up being a crazy exciting time of expansion for us.  But for those who like the inside scoop:  Get Ready!!

First off:  We have an exciting new staff member to introduce.  Roger Gerstenberger has signed on.  His whole family is a delightful hot breeze from Oklahoma. (He’ll be helping us with the finances… and much much more.)  Once you get to know him and his wife Patty (& kids, Carlin 16, Peter 12, & Brady 7) you’ll say:  “Wow, these guys are gonna be a dynamic part of the Substance family.” Roger has played many pastoral roles over the years and has been a C.F.O. over a budget that is many times larger than Substance’s.  So, you can imagine how elated we were when they felt God tell them to move north. (Roger is the Substance equivalent of the Twins’ “Jim Thome” : )  In fact, if you remember John Bolin (who preaches occasionally), Roger is John’s bro-in-law).  So when you see them… give ’em a high-five!

Also, many of you have probably already heard: We’re expecting to break a few attendance records throughout the months of Sept.-Oct.  In fact, there are over 100,000 homes who have received a fun Substance mailer advertizing our new sermon series:  “Why Me?” Our website has been inundated with new people.  So, it’s highly likely that we are going to have literally hundreds of new visitors every Sunday for the next 2 months.

“But what can I do to help P-Peter?” Well, to start:  Fridley will likely experience record crowds… so if you could, try parking in our volunteer lot (at the Middle School across the street).  It adds a short walk but, the weather is still fantastic : )

Also, introduce yourself to someone new (Come early. Stay late!)  And we have a few more opportunities on ministry teams.  For example, our kids ministry has some exciting expansion going on.  We’re taking things to new levels.  So, get involved!

P.s.,  Many of you know that Substance plays a huge role in planting churches all over the world.  In fact,  last month I helped lead a church planters conference in Oklahoma.  This month, Orlando.  Next month I’ll do one in Colorado.  In fact, this Sunday, Sept.12th, we’re helping & coaching in the launch of 6 churches! …the next week, another 3!

But here’s the point:  Be praying.  And get involved.  We’re fueling a movement here.  So don’t miss the exciting times ahead!