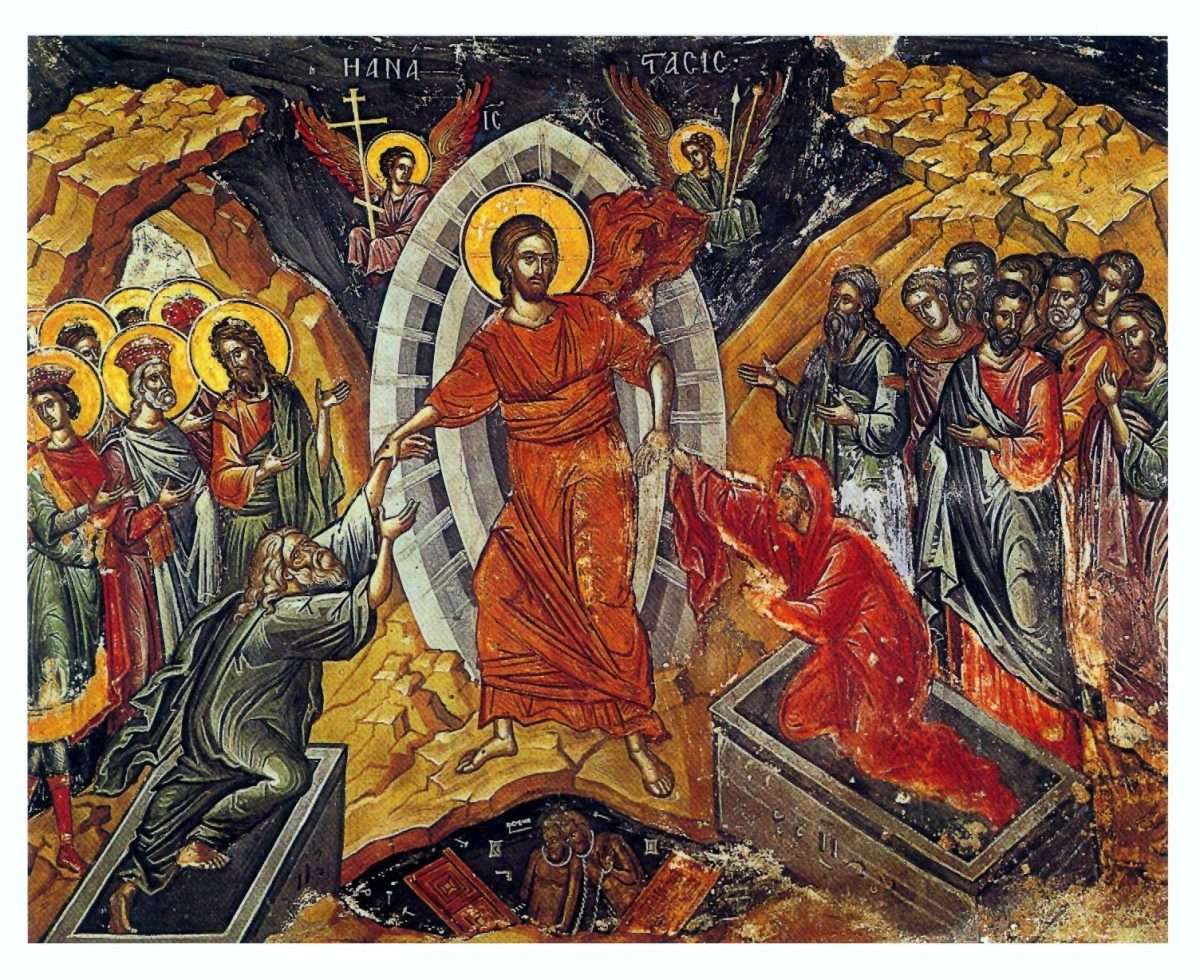 Did Christ Really Descend into Hell?

Did Christ Really Descend into Hell?

Over the years, I’ve been asked this question a lot. If you grew up in a good Catholic or Lutheran church, chances are you were forced to memorize the Apostles Creed, which says: “[Christ] was crucified, died and was buried,” followed by the statement: “he descended into hell.”

Now, it’s important to point out that this phrase “he descended into hell” exists nowhere in Scripture. Even more importantly, this phrase didn’t even really exist in the apostles Creed until around the mid-seventh century. All of the earlier versions of the apostles Creed stated that “Christ descended to the grave” – which is why I excluded the phrase when I preached through the Apostle’s Creed in our series, “This I Believe” in Fall 2017.

But, much like other medieval Catholic myths (like Purgatory), priests began trying to force certain Bible passages into confirming ideas that simply don’t exist in the Scriptures. Yet, unlike the doctrine of purgatory, the idea of Christ’s descension into hell still seems to perpetuate itself into modern evangelicalism.

So, it begs the question, what are we to make of all this?

Well, for starters, I want to remind you of the time when Christ was on the cross. If you remember, there was a thief who realized that Jesus was the Christ. And in Luke 23:43, we read that Jesus said to him: “Today you will be with me in paradise” (Luke 23:43).

Notice that he did not say: “Hey, do you wanna descend into hell with me for a couple days?” He also didn’t say, “in three days, I’ll catch up to you in heaven.” Rather he said, “today.” And why? When we die, we go directly into the presence of the Lord (see the martyrs narrative in Revelation 6:9-11).

As the Apostle Paul puts it: “to be absent from the body is to be present with the Lord” 2 Cor. 5:8. And specifically, Jesus used the term “Paradise” – the same term Paul used when he described being caught up to the third heaven in 2 Cor. 12:4 where he “was caught up to paradise and heard inexpressible things.” How else are we to interpret Christ’s use of the word “paradise?” The expressions “today” and “paradise” are rather difficult to explain without some sort of conscious experience of God’s presence.

Then, where did this phrase come from in the Apostles Creed?

“it is surprising to find that the phrase “he descended into hell” was not found in any of the early versions of the Creed (in the versions used in Rome, and the rest of Italy, and in Africa) until it appeared in one of two versions from Rufinus  in A.D. 390. Then it was not included again in any version of the Creed until A.D. 650. moreover, Rufinus, the only person who included it before A.D. 650, did not think that it meant that Christ descended into hell, but understood the phrase simply to mean that Christ was “buried.” [Thus] it was not in the Roman form of the creed that he preserved.” (Systematic Theology, P.586).

Some scholars argue that, this phrase was acquired through a translation error of the Greek word Hades (which can mean both “grave” as well as “hell” depending upon the context.) But this was merely one of many mythological beliefs that crept into the church during that era.

For example, Pope Gregory the first (in the 500’s) was notorious for taking many of St. Augustine’s theological hunches and turning them into doctrines such as purgatory. After this doctrine became an economic backbone (to support Mediaeval power through indulgences), by the 1500’s, the papacy was desperate to find Biblical support – even to the degree where they added additional books to the Bible that simply didn’t belong (like 2nd Maccabees) – hence the addition of the Apocrypha to the Catholic Bible.

To put it another way, the Middle Ages were not the Golden age of sound doctrine. Yet, despite many of the cleansing of actions of the Reformation, there were obviously minor doctrine-myths that have lingered onward throughout church history. Many would argue that Christ’s descension into hell is one of those myths.

“But, what about the Bible texts that seem to teach this?”

Many people try to find biblical support for Christ’s descent into hell in the following five Bible texts: Acts 2:27; Romans 10:6-7; Ephesians 4:8-9; 1 Peter 3:18-20 and 1 Peter 4:6. However, a careful reading of these five Bible texts will reveal that, none of them are remotely conclusive of such a doctrine.

For example, many people try to force 1 Peter 3:18-20 into substantiating this doctrine. So, let’s read it together:

“For Christ also suffered once for sins, the righteous for the unrighteous, to bring you to God. He was put to death in the body but made alive in the Spirit. 19 After being made alive,[d] he went and made proclamation to the imprisoned spirits— 20 to those who were disobedient long ago when God waited patiently in the days of Noah while the ark was being built. In it only a few people, eight in all, were saved through water, 21 and this water symbolizes baptism that now saves you also…” (1 Peter 3:18)

But does this passage truly teach that Christ descended into hell?

First off, let’s ask the question: Why in the world would Christ need to preach to people in Hell?

The Old Testament indicates that believers who died before Christ’s death still went on to be with the Lord (see  Gen.5:24; Luke 16:22). As David put it: “I will dwell in the house of the Lord forever.” (Psm 23:6) – not temporarily hang out in hell for a thousand years or so until Christ.

Indeed, the covenant of Grace (that had begun with Abraham) had already been active in the lives of everyone in the Old Testament who trusted God for his “righteousness through faith” (Romans 4:1-8). Christ wasn’t the beginning of the grace covenant; merely, he was the upgrade to the covenant (see Hebrews 9).

Secondarily, 1 Peter 3:18 does NOT say that the Spirit of Christ preached to everyone; rather, only, “those who disobeyed in the days of Noah.” So, why would Christ leave the cross and go all the way to hell to preach to such a specific group? Why not those who disobeyed in the days of Moses, or Ezra, or David? Why didn’t Christ go to those who “obeyed” as well (if Catholic theology is right)?

At some point, the careful reader will say: “There is no way Peter is talking about Christ descending into hell;” rather, Peter is merely saying: “The same Spirit of Christ, who’s been testifying throughout the ages, is desiring to redeem us as well.”

Now, for the sake of time, I won’t go through each and every proof text. However, in every case of the five texts mentioned above, none of them squarely uphold this mythological doctrine. All of them are an awkward fit that requires us to jam this mythological concept into a passage where it simply doesn’t exist.

Last, but not least, does it really matter?

Well, aside from making a mess out of the critical Old Testament Covenant of Abraham… I suppose not. In the end, it’s probably more of a theological pet-peave of mine than it is a critical point of doctrine. I certainly wouldn’t burn anyone at the stake from your aunt Susie’s bible Study for wanting to believe it. And, if it was true, it would make that old song from Carmen more exciting! (Remember “the Champion” lol).

At the end of the day, we don’t exactly know what Christ was doing between Good Friday and Easter Sunday. But, I can guarantee you, he wasn’t hanging out with “those who disobeyed during the days of Noah.” He was far too busy celebrating other things : )

(For further reading, Wayne Grudem covers all of these Bible texts and more – Systematic Theology – Pgs 586-594).