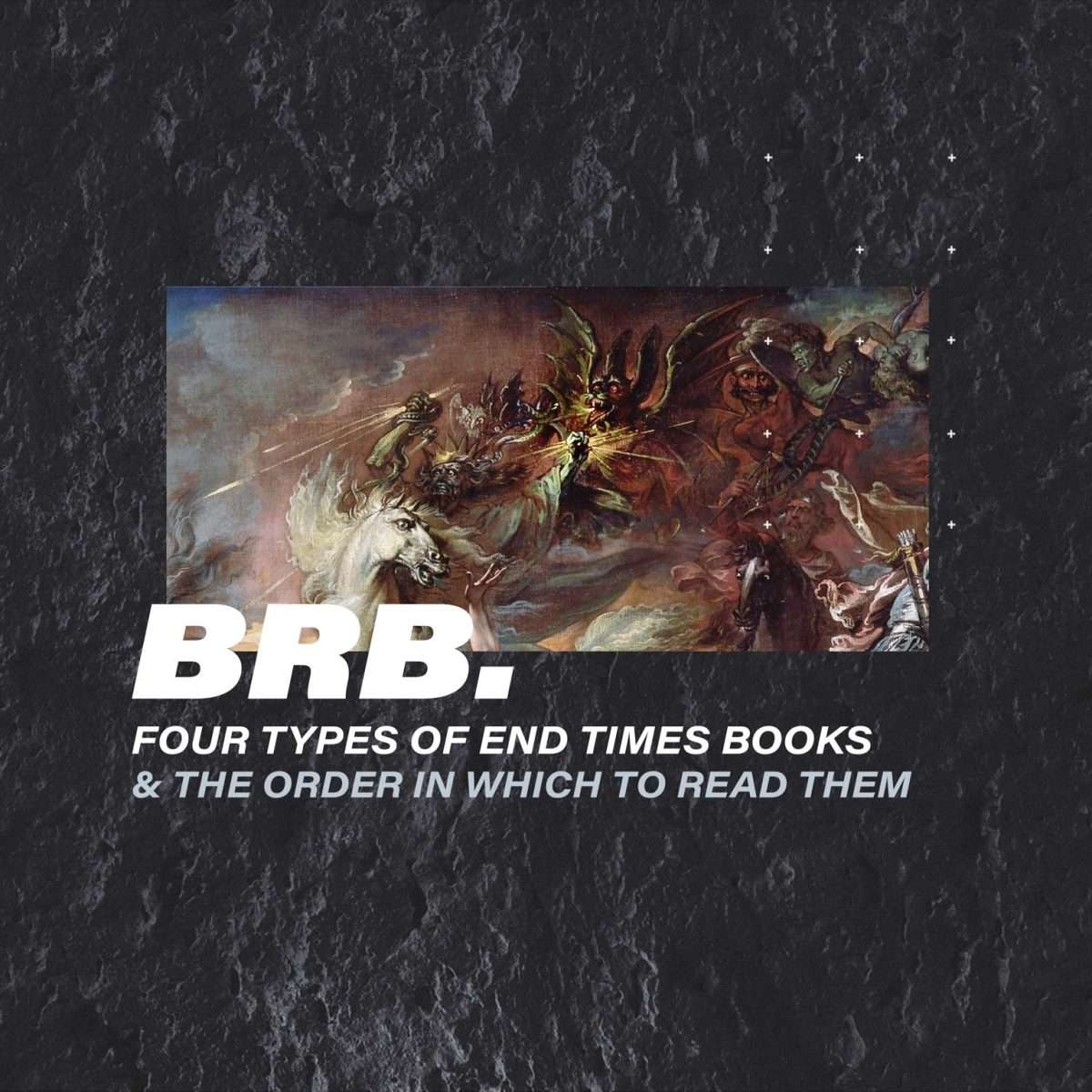 Four Types of End Times Books & the Order in which to Read Them!

At Substance, we’ve been doing an End Times sermon series called: “BRB: Tough Questions about the Second Return of Christ.” And in case you didn’t know, the academic word for this is called: Eschatology (pronounced, Es-ka’TOL-ogy). Thus, if someone writes a book about the end of the world, the book of Revelation, or God’s final plan for modern Israel, it’s generally considered to belong to this category.

So, naturally, I’ve been getting a lot of requests for various book recommendations. And if you browse for them, you’ll quickly see, there are a LOT! And part of this is because, most people feel like we’re living in the last days of planet earth.

But the other reason why there are so many books about the end times is because, well… They sell well and appeal to people who want a sense of control over the chaos! The only problem is that, many of these books are total trash and they often use End Times topics to scare people into heaven. So, it’s not uncommon for people to ask me: What books should I be reading? And what books should I avoid?

Keep in mind, if you’re trying to determine your theology of the End Times, you can’t do it over-night. Think of it like building a big tower on your own: You need to focus on the foundation as well as the pillars. And here’s how you know you’ve built the foundation right: If you can’t make a good argument for every major eschatological approach, then you probably haven’t done enough homework to have a strong opinion. So, don’t build your house (or tower) on the sand! And the opposite extreme: Don’t avoid the topic either!

So, before I list the four categories of books about the End Times, I’m assuming you’re reading “THE” best book, the Bible! And I outline a basic Bible reading plan of the most hotly debated chapters in my blog on How to Decide Your View of the End Times – A Five Step Study Process

But, with all that said: Instead of just telling you what books to read (and giving you my pre-digested theology), I’ve created a list outlining four types of eschatology books and the order in which you should read them. And then below all of this, I give a few recommendations!

In these types of books, the author has already picked a very specific approach to the end times (based on dozens of huge assumptions). In some ways, it’s good to have at least one of these for each of the four historical approaches. After all, each approach can get confusing; so, it helps to have a book that gives you a good overview.

But keep in mind, there is one interpretation of End Times events that tends to dominate right now: Dispensational Pre-Trib Pre-Millennialism tends to overwhelm the book market. (It’s the Left Behind interpretation – with the rapture, the anti-Christ, etc). But it’s important to know this because, if you bought 10 books on the end times, probably 8 would all be the same Dispensational Pre-Trib approach — which won’t give you a very diverse set of viewpoints. Many of these authors don’t allow you to peek into the dozens of giant assumptions that brought them to these conclusions.

Thus, before you dive deep into these types of books (listed at the bottom of this article), I usually recommend that newbies start with the second category of end times books:

Many books survey several theological views, then give a point / counter-point debate about their key scriptures and assumptions. The good news is that there’s a decent number of them that will help you get a good overview of each positions (as well as the scriptures that back them up). So here are a few to purchase!

This is my new favorite! Imagine if someone merged a high-school history book with a DK travel book (you know, those books with glossy pictures on every page). The first few chapters felt a bit basic to me. Yet, by the end, I was like: “This book is brilliant!” I was surprised by how well-written and fair it was to each view-point. In fact, I now recommend it to be one of your first five eschatology books.

A Basic Guide to Eschatology: Making Sense of the Millennium by Millard J. Erickson – This book is, by far, my favorite survey book from the last 10 years — especially for teaching pastors. I’d recommend skipping the first couple chapters on Schweitzer and Bultmann (as they’re kinda boring) and dive right into the Millennial views : ) But, it is SO helpful for getting all the basic arguments. This book also led me to a lot of other substantial treatises on the subject! This should also be another one to add to your “first five End Times books.”

The Last Days Handbook: Robert P. Lightner – After I first became a teaching pastor, this was the first comparison book I could find on the subject. And honestly, it was the first book that helped me get a grasp of the big picture. So, even though it’s not my top pick anymore, I’ll always be fond of it. But, it’s been updated since I read it; so, it just might be your fav!

“The Popular Encyclopedia of Bible Prophecy” by Tim LaHaye & Ed Hindson – This should probably be another one of your first five books based on simple helpfulness. It’s definitely written with a Dispensational Premillennialist bias — which can be quite irritating in certain articles. Yet, even if you aren’t a Pre-trib Dispensationalist, the essays can be a lot more thoughtful than the articles you’ll find on the web! (And the irony of you reading this article on the web right now isn’t lost to me haha).

But this encyclopedia is going to be super helpful as you sort through the topics. After all, there’s a lot of lingo and weird debates that can get confusing, like Gog & Magog, The Restrainer Debate, Ezekiel’s War vs. Armageddon, Preterism, Parousia, etc. A lot of nerdy writers tend to throw these terms around like they’re everyday words. So, it helps to have some non-website based scholarship – (as it tends to have better citations that enable more research) as well as more scriptures.

Last, but not least: If you’re a teaching pastor, who needs to be extra thoughtful before you open a can of worms on your church, it’s critical you sort out your “theology of Israel” (I.e., Does the church replace Israel? Is the church “spiritual Israel?”) This matters because, your opinion on this will fundamentally alter how you interpret both “the rapture” as well as the Millennial reign of Christ. The academic terms of this is: “Dispensationalism vs. Covenentalism.” Thus, for comparative books, try:

And this leads us to the third category:

At the risk of sounding obvious, it also helps to read the key eschatological books. And even more important, it helps to read them in the order in which they were written. It’s amazing to me how many people start with Revelation. But many scholars argue that the prophetic books (like Zechariah and esp. Daniel) form the backbone. So, study them before the Olivet Discourse and Revelation — especially because they constantly refer back to these books! In fact, of the 404 verses in Revelation, over 360 of them are direct allusions to Old Testament prophecies! So, if you study them out of order, it’s easy to come up with weird assumptions.

But, let’s be honest: Apocalyptic books can be rather difficult the first few times. Thus, grab a good commentary that can cover the chapters, verse by verse. (And keep in mind: there are academic commentaries that specialize on the Greek & Hebrew as well as “lay-person” commentaries that stay pretty basic). But once again, it’s critical for you to know if you’re reading a commentary by a Premillenialist or Amillennialist before you buy it. And it’s helpful to have both.

The Book of Revelation – Robert H. Mounce – This 1977 commentary is still a classic. I like this because: (1). It’s an academic commentary yet is accessible to normal folks. (2). He has a cautious premillennial hermeneutic – which is increasingly rare now adays; and (3). He has a solid understanding of the apocalyptic genre. (It’s a part of the NICOT/NICNT commentaries which are, by far, my favorite overall commentary set).

For additional commentaries, try out “Revelation” by Grant R. Osborne. He also gives a tolerant survey of various views.

And if you want an Amillennial commentary that’s reliable and technical, consider G.K. Beale’s “The Book of Revelation” from NIGTC (get the shorter one). And a lot of people enjoy, Revelation for Everyone: N.T. Wright

This final category often crowds the top selling ranks at the bookstore. These are books that are partially about the end times but are equally about conspiracies and current events. They usually have a little pre-digested theology (usually Dispensational Pre-trib); but, instead of sharing a lot of “foundation scriptures” that actually help you figure out your doctrine, instead, most of these authors assume you agree (perhaps throwing a little shade at anyone who’d dare to disagree). And then they obsess over Blood Moons, Bible codes or the geo-political politics of modern Israel – as if it were “evidence” of what the Bible teaches.

“Tipping Point” by Jimmy Evans is somewhat of a perfect example of this genre.

But here’s a little piece of advice: If you can’t give a solid scriptural argument for all the historical approaches to the end times, then, you probably shouldn’t be reading these types of books yet (Aunt Linda, I’m talking to you).

And keep in mind, I actually enjoy these books — as I love hearing theories about the End Times! But, I also think that many of these books are walking on thin-ice. Some of these authors are only one step away from being a Fox News Pundit lol!

But seriously, it truly makes me sad when Christians know more about blood moons and rabbinical traditions than they do the actual words of Christ from the Olivet Discourse. And I realize that these types of books are exciting. But they are often filled with religiously transmitted diseases too.

Even still, there are a few brilliant ones! My current favorite is “Final Warning” by Carl Gallups.

Lastly, as I mentioned above (in Point #1), you need to get a few “Predigested” end times books (that give a full synopsis of a singular interpretation).

For my top picks on “PRE-DIGESTED End Times Theology”

Dispensational Pre-millennialism:  “The End Times in Chronological Order” by Ron Rhodes – If you want a clear and concise idea about the complicated order of a pre-tribulation rapture, this is an interesting read. It may not give you a deep understanding of the scriptural arguments behind it all. But, the goal is to give you a basic understanding of all crazy terms from a Dispensational Pre-mil view.

Historical Pre-millennialism: “The Blessed Hope” by George Eldon Ladd is my classic pick. But, my current favorite is “End Times Made Easy” by Gary Wentz. The graphic designing is terrible. But he seems to have a good spirit about him. And he’s super insightful – even though he’s got no academic street cred.

Amillennialism: Try “The Bible and the Future” by Anthony A Hoekema  or “A Case for Amillennialism” by Kim Riddlebarger

As you’d imagine, there are a million other books I could have mentioned. And if you have any recommendations, let me know. I probably rip through a book each week so, I’d love any suggestions. And be sure to watch the sermon series and read my other blogs on this subject!