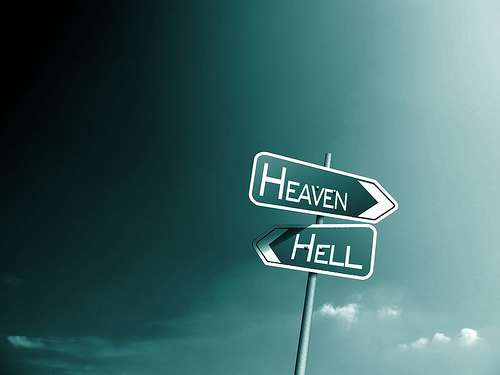 How Can a Loving God Send People to Hell?

Posted On September 24, 2017 By Peter In Uncategorized

In our recent teaching series, “This I believe,” I’ve been talking about various doctrines covered by the Apostles Creed. But whenever I teach on the doctrines of hell, it always results in a fantastic discussion on the fairness of God. Keep in mind, I believe that the existence of hell is the greatest evidence of God’s love. In fact, I don’t believe God could be loving unless he allowed people to go to hell. And if this idea sounds strange to you, then, chances are you have a few classic misconceptions about God and the Bible.

For example, a young lady once told me: “God couldn’t be loving if he sends people to hell.” “What do you mean?” I asked her. “Well, it just seems like the punishment just isn’t proportionate to the crime?” After talking to her for a few minutes, I quickly realized, she didn’t really know much of the Biblical teachings on hell. After all, I don’t believe that God “sends people to hell” as much as he “allows people to send themselves there.” Of course, at first, she seemed confused. So, I unpacked it another way. I said, “think about all the wicked things people have done over the centuries. Think about concentration camps. Think about the record high 20 million women who have been raped in the last 10 years. Think about corporate greed. Every day, there are 22 Christians who are martyred directly for their faith. Think about militia groups who strap bombs to six year old kids to blow up their adversaries. And I asked her: “Could we truly call God loving if he turned his eyes away from all this?” At some point, a loving God must be a Just God as well. Even more, could you really call yourself a ‘loving parent’ if you let your 2 year old child play on a busy highway?” No one would ever say: “Wow. Look how loving I am. I allow my kids to do whatever they want.” Rather, we would call that abusive – even evil. And in a similar way, could God truly be loving if he never created boundaries or consequences like hell?” I could tell I had her thinking.

In some ways, boundary setting is one of the fundamentals of parental love: “I LOVE you, which is why I won’t let you play in the busy highway!” Will every kid understand these boundaries? Of course not. In fact, very rarely did my young kids ever understand when I disciplined them. They couldn’t understand why I didn’t want to buy candy for them every time we went to the grocery store. One time, they even called me “mean” even though, I was in fact the exact opposite of mean. So, I finally asked the young lady: “If God forced everyone into heaven – against their will – would that suddenly make God ‘loving?’ I mean, what would resolve it for you?” We have a word in our culture for “forced love.” It’s called Rape. So I finally encouraged her: Don’t embrace a twisted view of God just because it “feels right” to you. Think through the greater implications. After all, a “Rapist” view of God (where he forces everyone into heaven) or an “Unjust God” (where he suddenly ignores that evil exists), won’t ultimately resolve your issues. At some point, it’s going to create the same moral crisis in our heart. And I’ll never forget her response. She said: “Wow. Perhaps I’m not all that qualified to judge God’s fairness in the first place.” And when she said that, I thought, “that’s exactly the problem.”

At the end of the day, we don’t know what God’s knows. We have no idea the extent of the damage done when sin entered the world. And we certainly don’t know what’s the best way to resolve it either. At the end of the day, we’ve got to think thoughts through God’s perspective. And how do we do this? By meditating on the 100’s of scriptures that unpack his perspective – even the scriptures that disturb us more.When we do this, we’ll learn that God LOVES us. He desires that “none should perish.” Yet, he has more issues to consider, such as justice and free-will, and not to mention: “What kind of parenting will properly open my loved ones to reality?”

Now, if any of this is confusing to you, I encourage you to download the last two installments of our teaching series, “This I believe.” We’re going to be answering questions like: Is Hell Fair? What about those who haven’t heard? Did God really give all people a chance to accept him? What does the Bible actually teach on hell? Is it true that hell could be locked from the inside? Of course, in the first installment, I handed out “notes” on hell. And if you watched the video or podcast (and came here to find those notes, you can download them here; If you are super excited and don’t want to wait to watch these messages, I wrote an extended treatise on the “doctrines of reprobation” (aka., theology of hell). And if you’re feeling extra curious, I even go quite a bit deeper than I ever could on a Sunday. You can download that document here.

But here’s the point: Don’t run from your questions. I believe God is LONGING to give you revelations here. As I look back on my life, I honestly never understood the love of God until I understood these doctrines. So, don’t miss out on learning about these amazing attributes of God simply because those passages might disturb us.