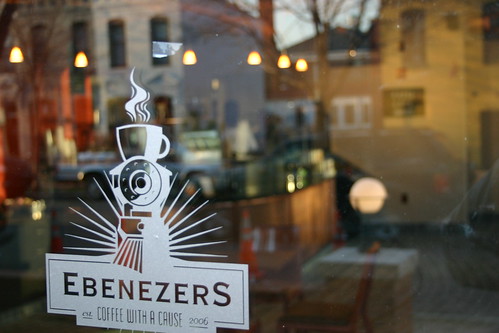 What a crazy 24 hours!I just got back from a cool event in Washington D.C.No. I didn’t go for the national day of prayer.(However, I did throw a few up while I was there).Rather, it was basically a pastor’s round-table discussing the emerging forms of 21st century Pentecostalism.But the topic itself wasn’t the coolest part.The best part was meeting guys like Mark Batterson at National Community Church.

What I love about that church is that it’s right in the middle of everything (right next to Union Station on Capitol Hill.) Obviously, to be in a place like that, building options are astronomically expensive; yet, God’s presence needs to be manifested everywhere.

Of course, the church realized that they need to create seats for lost people; but, they can’t afford to build big suburban style church auditoriums.So, out of necessity, they’ve turned to a video venue model.In fact, listen to how they do it.

They have a gorgeous coffee shop.In the basement, they have a 150 seat tv. studio auditorium (in which they have 2 Saturday night services).They record the sermon on video, then they have 6 other larger Sunday services the next day in movie theaters up and down the subway system (all of which are portable)!And you thought Substance had a complex set-up!

Of course, I know that some people perceive that “video venues” are cold, impersonal, and are probably the creation of an ego-maniac teaching pastor.But, if you ever visit churches like N.C.C., your mind will be changed forever!

Seriously, because of video-venue methods of church, N.C.C. is able to pour millions of more dollars into missions than the typical church.Even more, their staff pastors don’t need to waste endless time writing “duplicate sermons” when instead they could pour their time into discipleship.They also get to plant niche churches into expensive and/or urban areas that would never thrive outside of a “video-venue” model.

Anyway, even if you don’t agree with non-traditional models, we can still thank God for creativity.Because creative pastors like that are the ultimate answer to most of the prayers which went up last Thursday.

And, Oh Yea…Because it’s the national day of prayer… why do you throw up a few prayers of your own!

“God, I thank you for your gracious blessing on Substance.Help us be the church that can be a light unto this nation!”Amen?