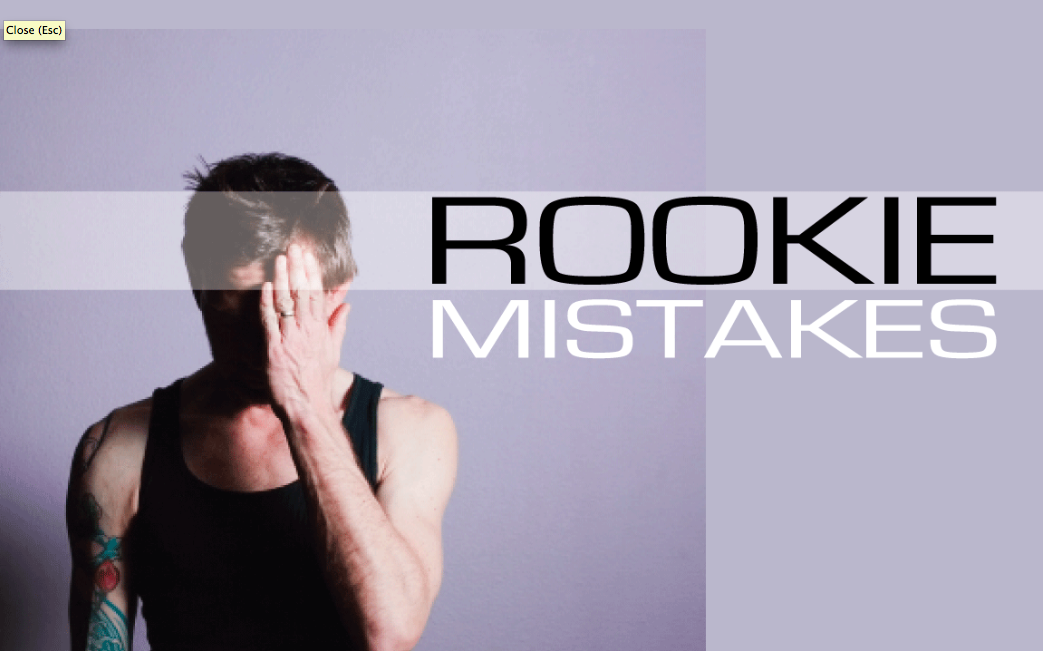 Leadership Lessons I Figured Out the Hard Way – Part 1

Over the last 2 decades of full-time ministry, I’ve made a lot of leadership mistakes!  There are messages I wish I could take back – meetings that I should have never called.  There are some days when I’m totally amazed that anyone has stuck with me over the years… including my wife 😉

For example, for those of you who’ve read Pharisectomy, I wrote about the time at my first church when I cussed in the pulpit – forgetting that the children’s ministry shared a thin wall with my auditorium.  Or in Broken Escalators, I shared about how my entire life changed after taking over my first senior pastorate. I had all sorts of idealisms about what I could accomplish; but, I completely under-estimated the politics and non-stop pressure.

You see, leadership is a lot like being a quarterback… most of our mistakes happen in front of people.  Thankfully, however, we don’t have to learn from the school of hard-knocks.  Instead, we can learn from wisdom.

As a church that’s filled with up-and-coming leaders, I’m constantly being asked:  “What are some of the most common rookie mistakes that new leaders or full-time ministers make?”  So whether you’re a mom leading your kids or a business person, over the next week, this blog series is going to give you a few humorous lessons from from my sordid past.

But Part One’s Rookie Mistake is this:

I Underestimated the Power of Spiritual Warfare:

We’ve all read Ephesians 6:11-12.  We all know that there are “spiritual forces of evil” who have “schemes.” But the reason why Paul reminded us of this is because: WE FORGET!  Leaders experience a constant temptation to falsely assume our problems are with people (a.k.a. flesh and blood) when they’re not.  The devil is a “thief” whose mission is to “destroy” (Jn. 10:10).  He robs us of energy all the time with silly things.

The Bible repeatedly shows him whispering half-truths into people’s ears (Mt. 4).  He even whispered to a boy, “throw yourself into a fire and kill yourself” (Mk.9).  And his attacks are very strategic.  Which is why the Bible says that Satan waits “until opportune time[s]” (Lk. 4:13).  And this is especially more common for those in leadership.

For example, most of you reading this blog have a boss, mentor or “upline” that you answer to.  I want you to think about this person for a second because, quite likely, that leader has more spiritual attacks than you do. They possess an influence that the devil wants to erode. And the devil doesn’t “play fair.”  He’ll attack this person’s kids, health, finances and emotional energy.  And if you’ve got any weaknesses, he’ll even use you to launch his attacks.

By this point, you’re probably thinking:  “Well, I’m in leadership too.”  And, yes, that means you too have a target on you.  Unfortunately, as a immature leader, I was slow to see this.  As a result, I burned a LOT of emotion getting caught up in staff drama.  I.e., I mistook spiritual warfare for “leadership problems.” And because I thought my problem was “flesh and blood,” I also turned to earthly solutions, like politicking vs. prayer.

One morning, I woke up to a buzz of crisis texts.  One staff member was adding drama.  Another local pastor had posted disparaging statements about our church – even though his information was wrong. Then I suddenly got word that I needed to prep another message for a speaking gig that someone else cancelled on.  Yet I desperately needed a day to get ahead.  The day before, I felt like I was about to score a touchdown.  Yet, today I felt like penalties had taken me all the way back to my own end-zone.  Have you ever had a day like this?

Everything in me wanted to go into crisis mode.  I felt so anxious that, the last thing I wanted to do was pray and read my Bible.  Yet, even still, I forced myself into a posture of submission.  That day I read 1 Samuel 2:9 “It is not by strength that one prevails.”  And after a long sigh, I decided to lay everything down before God.

Within minutes, it seemed like every crisis began to resolve itself!  The local pastor called and apologized… admitted his information was all bad.  The staff situation was being mitigated by another person on my team.  And suddenly, my speaking gig got cancelled.  I remember the moment when I sat in my office thinking:  “Whoa!  Was it really that simple?”

So, do you have any relational conflicts that are nagging you today?  Has someone’s decisions / critiques / social media posts gotten under your skin? Have you considered that your real problem (and real solution) could be entirely resolved in prayer?

Like Jesus said to the Apostle Peter (on the night he was betrayed), “Don’t you realize I have twelve legions of angels available to me.”  Indeed, if we live by the sword, [by human influence], we die by the sword.  So wherever you minister, stop swinging your sword over staff tussles, fears, or ideological disputes.  Ironically, you could be the very person being used by the devil to bring strife into your church.  So stop.  Pray.  And why?  “It is not by strength that one prevails.”