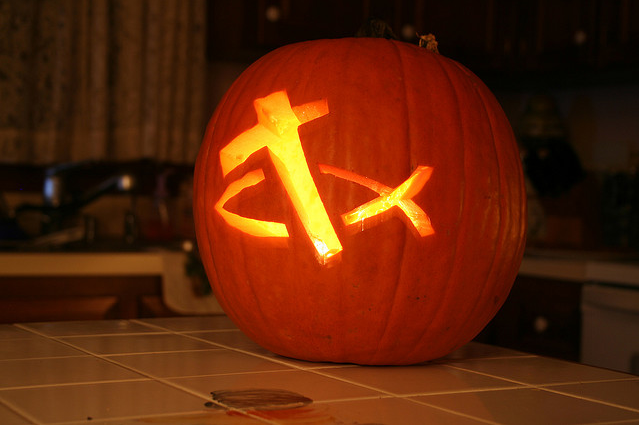 The Strange History of Trick or Treating… Prayer?

Throughout the middle ages people believed in a theological concept called purgatory…a place between heaven and hell where certain people could pay for their sins. Of course, most scholars don’t believe the concept even exists in the Bible (which I agree with). Some credit Pope Gregory the 1st (late 6th century) as the originator. But keep this belief in mind; because, as you’ll see in a moment, it had an interesting twist on the rituals of Halloween.

As Christianity spread through the tribes of unchurched Europe, the Catholic church wanted to co-opt certain pagan holidays by creating a new “Christianized holiday” on top. (For example, “Easter” is technically the name of the pagan goddess of fertility, but… don’t tell anyone). So, to overtake the pagan festival of Lemuria (and later, Samhain,) the church created “All Saints” and “All Souls” days as times to commemorate the dead.

Observers of Samhain believed that the barrier between the after-life and the present became thin at this time. Catholics found their belief in purgatory to be a convenient parallel for those transitioning out of pagan traditions. So to co-opt this pagan tradition, Catholics began an interesting ritual called “Souling.”

Keep in mind, Catholics believed that Christians could help people get out of purgatory by giving to the church (indulgences) and by praying. So, people were often quite zealous to recruit help for their poor relatives (you know… the ones who didn’t live quite right). And let’s face it. We all have a few family members who could probably use a “little help.”: ) So, All Souls day provided a unique opportunity for recruiting prayer.

On All Souls Day, kids would go out “souling” – a ritual in which they went door to door, offering prayers for “soul cakes” (spiced cakes mixed with cinnamon and raisins). Naturally, this was good for the poor (as they offered prayers in exchange for food). And over time became a tradition more like Christmas caroling (songs for figgy pudding). But the main purpose was to encourage young people to pray. So, the next time you sneak a piece of candy from your child’s stash, you can thank your Catholic friend : )

In some ways, it’s pretty clever. As a young kid, I would have been quite happy to pray if someone paid me in KitKat bars. And to think I was helping people on top? Wow!

Now, obviously, I’m not trying to say that Trick or Treating is good or bad. (After all, I know that many Christians have strong opinions about this stuff). Obviously, I don’t believe in purgatory… nor celebrating pagan holidays. But, doggonit, I’m all about giving thanks to God for candy!

Yet it begs the question: Is Halloween good or bad? Well, there’s a lot of nonsense that happens on Halloween night. I certainly wouldn’t wear half of the costumes at my local Halloween store. Even more, Minneapolis is hotbed for many die-hard pagan religions. (We’ve got the highest number of neo-pagan witches in the U.S. … & if you missed my blog on that, click here). But after seeing plenty of demons cast out of folks like these, I’d definitely be wary of how many people spend their Halloween.

But is trick or treating bad? If you see yourself worshipping pagan demons by doing it, then, Yeah, I’d avoid it. But if you simply see it as a good opportunity to reach out to your neighbors, then no. I don’t believe that dressing cute kids as Yoda or Elsa is going to demonize them.

Colossians 2:16 says, “Therefore do not let anyone judge you by what you eat or drink, or with regard to a religious festival, a New Moon celebration or a Sabbath day. 17 These are a shadow of the things that were to come; the reality, however, is found in Christ.”
In other words, people have always debated whether it’s truly “Christian” to celebrate (or not celebrate) a certain event. It’s nothing new. And I actually think it’s a healthy tension. Healthy Christians should always be asking: “Does this glorify the Lord?” But, when people start oppressing others with their ritual interpretations, they’ve stepped outside of the new covenant and back into the legalism of the Pharisees (and BTW, I think I wrote an entire book on this : )

In the end, follow your conscience. Pray for your neighbors. Eat candy with moderation. And don’t dress up like a sexy kitten.