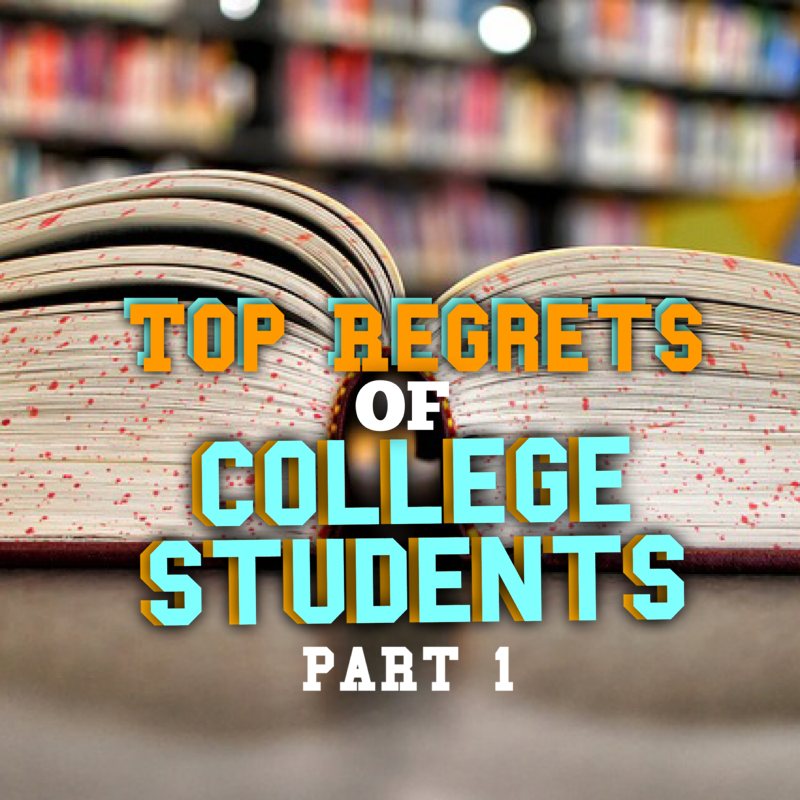 As many of you know, Substance has had thousands of college students come through our community at some point. In fact, many of our best leaders were going to college when they first found Substance. But as many of these same students entered the “real world” I’ve heard them voice a lot of regrets. Over time, I started hearing several themes emerge. So, in part one of this blog series, we’re going to hit the first three.

But here are the top regrets I often hear from them:

1. I wished I Tested out my Major in the Real World before I Over-committed to It.
When my wife and I went to the University of Minnesota, she majored in history and I majored in English poetry and Hebrew (really practical stuff : ) Of course, my wife tried teaching history in a school only to realize, she hated teaching with a passion. But, as we recovered from our blurry college experience, we had two revelations: (1). Colleges can educate you; but they cannot tell you your calling. And (2). Colleges are businesses that survive by taking your money. And many of them will take your money even if you’re not gifted or called to do your topic of interest.
Now, I don’t mean to sound crass about higher-education; but, it’s critical that you’re logging hours doing the work to unearth the calling that your major is supposed to be educating you for. For example, if you’re doing pastoral studies yet you aren’t deeply involved in volunteering at a successful local church, you’re only going to get confused. And you need extra advice on this, check out my teaching series Search from a while back: http://vimeo.com/album/1905360/video/40463218 I also talk a lot about how to “uncover your calling” in the latter chapters of my new book, “Broken Escalators.”

And as long as we’re talking about the limitations of a college education, keep in mind, one of the top regrets of post-college students is financial debt. Of course, I wouldn’t go as far as to say “people shouldn’t go to college” (as there are many incredible benefits of college). Rather, the real issue is: “What kind of degree do you want, for what type of job-force. And what type of school has the most cost effective and reliable way to achieve this?

But, it’s shocking to see so many young people logging $50k, 70k and a whopping 100k worth of college debt with no real understanding about what they’re called to do. And they do this whether the job market they’re aiming for is even remotely capable of reimbursing such a degree… (but this is a whole blog in itself! : )

2. I Wished I Avoided Dating Christians with “Potential”
A lot of Christian students have a famine mentality when it comes to finding a good Christian spouse. And they often cry to me “if I DO find someone, they’re probably going to be ugly and never wear deodorant.” As if we have a Heavenly Father who seriously doesn’t care. So, over time, many people compromise their standards and end up with a very complicated life. But think of it this way.

Imagine you were going in for surgery and right before they knocked you out, you asked the doctor a question: “So have you done this procedure before?” And they responded: “Oh, uh, no! None of us are actually surgeons and… this is the first time we’ve ever done this. But, a doctor told me I have great potential!”
You see, when it comes to issues of importance, you never want to place your life in the hands of “potential.” And just because they’re a “Christian” doesn’t mean jack. (Cuz I know a lot of messed up Christians). And this is especially true at a Christian college.
In fact, I wouldn’t even date a Christian unless they had a tight Christian small group and a weekly ministry in a local church. And why? Those two criteria are the top statistical predictors of spiritual growth and longevity in Christ. And if these disciplines aren’t a lifestyle already then I’m not convinced God would have you gamble your life with those types of odds.
Keep in mind, I see “Christian college sweethearts” get divorced all the time. So, don’t settle for just potential. And if you’re at a Christian college, don’t settle for the “ring by Spring” fever. I know a lot of Christians who married the drop-dead-gorgeous person only to hate their lives only a couple years later. God’s got the perfect person if you’re willing to trust him. And trusting him often means being patient enough to fully test out a person’s character before committing. (Here’s more thoughts)

But here’s my point: Avoid situations that put you in danger. If you stand around a slippery creek bank, you’ll inevitably fall in. So be wise with alcohol. And like I said earlier, don’t date anyone who doesn’t have a weekly ministry in a local church (which significantly increases the odds that a person has accountability on their sexual decisions). And if you need more motivation, here’s a blog I wrote on how sexual involvement messes up our ability to discern if “they are the One.”

As for more tips? Check out PART 2 of this blog.

By the way, if you’re attending the University of Minnesota, NorthCentral, Northwestern, Bethel, Concordia, or any of the other universities in the Midway, check out our new Substance Downtown campus launching Nov. 1st! We intensionally placed it in downtown to be closer to our university students!