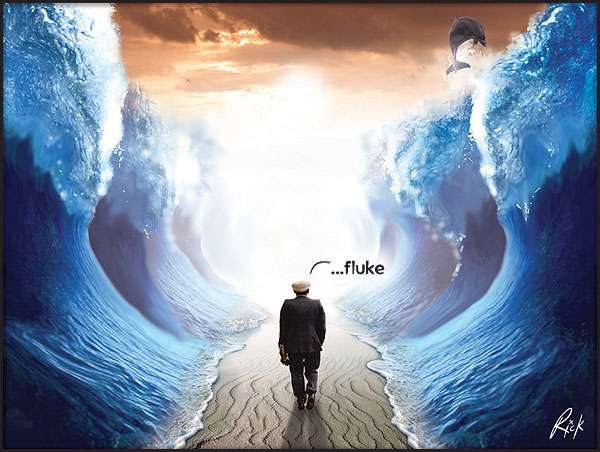 What about Fake Miracles and Urban Legends?

If you’ve heard me preach, you’ll know that I love to share modern miracle stories.  I’m kind of a skeptic at heart; yet, I’ve seen some undeniable miracles over the years.  This tension between faith and skepticism is a pretty common one – especially in a day and age when urban legends can be created over-night on the internet.  So let’s talk about this.

Keep in mind:  the very foundation of Biblical Christianity is built upon a miracle.  And God constantly used them to influence people to consider the scriptures.  For example, in John 9, Jesus famously works up a holy loogie, combines it with a little mud, and applies it liberally to a blind man’s eyes to yield healing (v. 6).  Putting aside obvious questions about the surprising healing qualities of a saliva-mud salve, this case is pretty interesting.  Keep in mind, Jesus performed this miracle in front of a community that was hostile to the notion that He could do so.  The Pharisees had branded Jesus a sinner (v. 16) and thus their assumptions about reality hindered their ability to accept the supernatural storm brooding right in front of them.  I like this story for two reasons: First off, Jesus challenges our culture’s mistrust of bodily fluids… (Besides… I think I might have a spitting ministry myself). But secondly, this miracle forces us to consider that God can do things that are contrary to the natural course of science.

Recently, on Easter Sunday I shared a series of modern miracle stories – people who’ve claimed to have encountered Christ and his healing power.   One dramatic story (which came from Egypt) got quite a response from some of our attendees.  It reads as follows:

“An Egyptian Muslim murdered his wife, then buried his 8-year-old daughter and baby,” reports a Californian ministry. The man claimed that an uncle had killed the children. 15 days later, another family member died. When the family buried the deceased, they found the two girls – still alive! When asked how they survived, the 8-year-old girl answered “A man in shining white clothes, with bleeding wounds in his hands, brought us food every day. He even revived our mother to breast-feed my sister.” In an interview with a Muslim journalist on Egyptian national television, she said “It was no one other than Jesus, because nobody else could have done anything like that!” The crime caused a national outcry, with many demanding the death sentence for the father. “It seems clear, though, that the child did not invent the story, and they could not have survived without a miracle,” says the source.

Afterwards, a number of parishioners understandably googled this event and responded with skepticism. After all, there are several websites that discredit the event as a lie.  As the skeptical sites argue, “if this was a nationally aired newscast there should be some pretty substantial evidence.”

To their point, you won’t find a transcript on-line or a video of the interview on youtube.   And for web-sites dedicated to disproving miracles, this is enough to label the story a sure fraud.  Of course, the discrediting site never bothered to mentioned the fact that the story was run in a nation openly and often violently hostile toward Christianity before and after the Egyptian revolution.  More than this, Egyptian media is aggressively controlled.  The Egyptian State runs much of the media directly and heavily sensors independent outlets. This is why the use of free-flowing information via twitter and facebook played such a major role in President Hosni Mubarak’s recent overthrow.  Contemporary Egyptian media is tightly controlled by threats and outright punishment.  Just today, Reuters reports that the Arab world’s most famous comedian, Adel Imam, is facing a 3 month prison sentence for “Insulting Islam.”[1]   Beyond the media climate, self proclaimed Christians in Egypt make up only about 10% of the population.   By in-large they are lower on the socio-economic totem pole.  As such, it is doubtful they would even have the means to record a news station much less post it online (especially in 2004 when the story broke).  And as we have seen, no media outlet will have an incentive to propagate a story that does not expressly support Islamic thought.

Yet, because of people’s concerns about the story, I had my staff contact the California based ministry and the Pastor and his wife who reported the story.  The ministry is a reputable group known to do evangelism in dangerous areas.  The Pastor linked to this story’s name is Victor Khalil.  He and some of the Substance staff have had correspondence about the story.  Rev. Khalil was born in Egypt and moved to the United States more than 40 years ago.  He received his PhD in the United States and is involved in several ministries in the Arab world.  Rev. Khalil now desires desperately to reach the land of his birth with the message of spiritual liberation through Christ.  Much of the reporting his ministry puts out has nothing to do with miracles, but rather socio-political realities that shape the lives of millions of people in some of the most politically oppressive places in the world.  Rev. Khalil and his wife affirm that they personally spoke with people who watched the newscast, and one family sent a write-up about it as soon as it aired.  Victor is hesitant to share names because of the volatility of the area, but he stands by the story.

Of course, it’s possible that Dr. Khalil could be a liar.  Many liars do, in fact, exist; and, as such, false miracles stories abound.  But given the context, a lack of media transcript or footage does not disprove the event as websites claim.  Small changes over time to the story do not suggest false pretense either.  I have personally heard stories change about legitimate miracles that I have seen.  Anyone who has played a game of phone knows the humans are fallible at best in their story telling.  At the end of the day, with this story, as with so many, we must decide simply whether we accept the possibility of miracles.  If so, accounts from reasonable people should be taken seriously.

I won’t draw this out, but interestingly enough, on the same day I preached that sermon, a leader in our prayer ministry felt that God told him to pray for his mother in-law.  She had been diagnosed with COPD (Chronic Obstructive Pulmonary Disease) a year and a half ago.  After that diagnosis, doctors recommended she have an oxygen tank with her everywhere to help her breathe.  She hated taking oxygen with her so wore it at night only, functioning during the day with chronic shortness of breath. Two weeks before Easter it had gotten as bad as it’s been and she could barely make it 20 yards.  She needed Oxygen during the day and struggled to do every-day affairs.  She rarely went to church, but her family insisted she make an exception for Easter.  That morning she reports that she had such shortness of breath she could hardly dress or make it through the foyer into the sanctuary.  After the service she received prayer, felt something pushing her down and was completely emotionally overwhelmed.  She values the stoicism typical of the Greatest Generation, but when she recounts that day tears come to her eyes and her voice breaks.  After prayer, she could walk freely back to the car.  Today, in her words when asked about the event she says, “what more can I say, I can breathe.”  Since her healing encounter, she’s been enjoying increased strength, freedom and breathing capacity, and there are times when she feels she’s regained everything she felt she lost a year and a half ago.

The story of this family is ongoing.  She has not yet gone to the doctor for a follow-up visit to confirm a diagnosis, but she is confident in her heart that her life is changed and she can still feel the presence of the healing.  As in the case with Jesus’ miracle in John 9, when looking at this sort of story, it matters more what our presuppositions are about the reality of God working supernaturally than the never-ending sleuthing for data.  In the case of our prayer leader, I know the family well.  I’ve seen the results from before and after.  But even in THIS firsthand story, I am relying predominantly on testimony!  If we believe that God is actively moving in unpredictable and often seemingly unacceptable ways, eye witness reports from a largely repressed world may be all the credibility we need, and indeed all that we could expect given the context.

Now I want to be very clear here.   I believe healthy skepticism is good and a lot of time we as Christians could use more of it.  I myself am a skeptic.  Most of my sermons involve statistics, studies, and the latest research on any given topic.  But when speaking about the very personal, very active power of God moving to transform one’s outer and inner self, sometimes we cannot expect more than the testimony, “I was blind and now I see” (John 9.25).