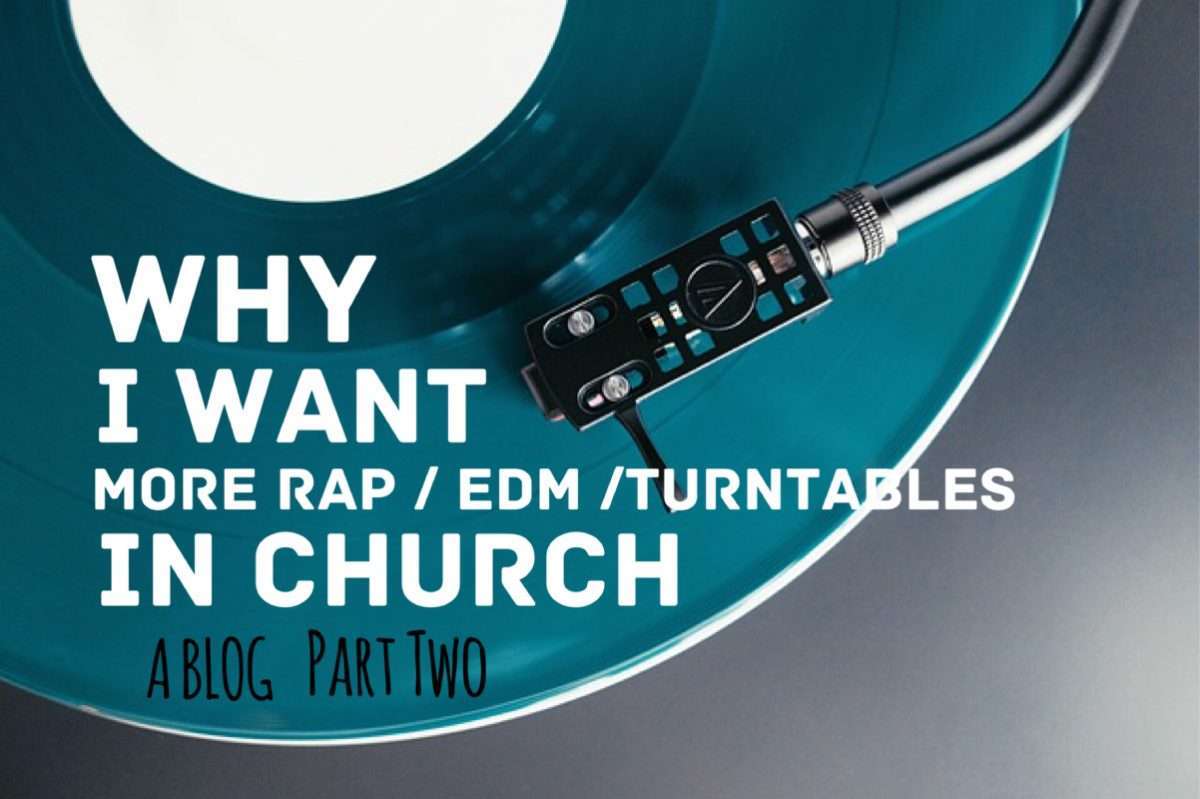 Why I Want More Rap, EDM, & Turntables in Church – Part 2

Posted On November 21, 2017 By Peter In Uncategorized

Even though rap, electronic dance music (EDM), and r&b have completely dominated both record sales and concert revenue for 17 stinking long years, most “contemporary worship” churches do not even have a single rap or EDM oriented song in their repertoire. So, in part one of this blog series, I made the case that, if we want to remain effective in using music to lead people to Christ, we may want to rethink the meaning of “contemporary worship.” After all, the only thing that’s “contemporary” about it is the fact that it’s not an organ.

There’s a classic story in 2 Samuel 6 that illustrates why many churches miss the new type of worship God is ushering in.

When the Ark of the covenant came home to Jerusalem, 2 Samuel 6 says that King David “leapt and danced before the Lord with all his might” – to the point where his clothes got sweaty and loose. The music they were worshipping to was quite different than the music they’d play in the palace courts. And when his wife Michal saw David worshipping like a “commoner” from afar, she “despised him in her heart.”

Essentially, God was doing a new thing. And God’s people were worshipping him in a way that seemed vulgar and undignified to her. Yet, God was so moved by David’s act of worship that he sent Nathan the prophet to let David know that, “I will make your name great… and raise up offspring to succeed you.” (2 Sam 7:9,12).

Unfortunately, Michal, experienced the opposite fate. Her womb was barren until “the day of her death” (2 Sam 6:23). And when I read this, I couldn’t help but to see a parallel with a lot of modern churches: some are willing to embrace new styles of worship, and thus experience the joy of reaching a never ending flow of new spiritual kids; yet, other churches take on the spirit of Michal. They become elitists. They convince themselves that people are seeking their particular brand of tradition. They unconsciously make certain musical styles sacred. And to keep the peace, many leaders settle on one of two music styles: Organ or “Acoustic Rock.”

I remember when I first read the passage about David dancing before the Lord. It stuck out to me because, I realized, there isn’t a single modern worship style that synchronizes with any modern forms of dance. Don’t get me wrong: artists like Hillsong United and Crowder have come close with punk anthems and folk rock that gets people jumping. Yet the idea of dancing like David “leaping and dancing with all his might” still seemed like an impossibility based on the types of worship that are being promoted.

And I’m not against the music that’s currently being produced; however, I’m definitely trying to say: there is a MASSIVE genre gap in worship music. There is a MASSIVE unnecessary cultural disparity between the church and the world. And it’s not only hindering our ability to worship like David, but it’s alienating the world from God’s church simply because we don’t offer anything that’s remotely similar to the music that inspires them on a daily basis.

So, the million dollar question I want to explore is this: how do we begin incorporating new styles to maintain our relevance? Well, it’s important to realize that context and timing are critical to art. For example, almost all modern forms of music feel weird on a carpeted stage with white lights. And I don’t care if your worship band is amazing at dance music, the 9 am service is still probably not interested in hearing it. So, your leaders may need to have a few discussions about your facilities and service times. But, for most of us, the issue is talent.
“If I had a decent rap artist, I’d throw them up on stage!” one pastor told me. “But anyone else will just cause people to hate it.” And honestly, I empathized with this leader’s vigilance. As a former DJ, I hate it when Christians toss cringe-worthy electronic music into their services – which only causes people to hate EDM – when the problem isn’t the music, it’s the talent!

But allow me to encourage you: most churches have far more youthful talent than they realize. And all you need to do is start creating small platforms in your church for people to express these gifts.

I’ll never forget the day when I had a young intern in my basement recording studio. He had a unique voice so I asked him to come and record a quick voice over for a short documentary film I was making. As he modified my script to fit him, he had a flow and tone quality that I thought was incredible.

“Have you ever written music?” I asked him.
“Not really” he answered. “But I’m definitely interested in learning.” So, I encouraged him to write some raps and sent him home with some music loops to experiment with. Of course, that young intern was a man named Nick Foulks (who rapped on our recent I/O album).

Encouraging him to start was the easy part. The hard part was the first day he asked if he could rap during our worship set. At the time, I was nervous because our church was tragically youthful. We had about 500 people coming. Yet, 80% of our budget came down to 4 Baby Boomer couples. And, the last thing I wanted to do was scare them away with a worship style that was too extreme for them. So I finally told him: “You have to promise me that it’s going to be saturated in the anointing of God!” And, I was probably nervous enough where, I said it like a threat. I was already anticipating mean spirited letters.

But by the time the band finished the set, a 60 year old woman came running up to me saying:
“If that’s rap, then I am a HUGE fan! That was the most anointed prayer I’ve ever heard chanted from a platform.” And from that time forward, our team made it our goal to continue pushing the envelope.

But it still requires that we think through issues like quality, context, and believability. If we do, the Spirit of God can scratch out of a turn-table the same way he does through a synth pad. And who knows: someday, we might just fire up that organ at our downtown Minneapolis campus. After all, I think any style of music that’s done well can inspire people – well, almost any style (the song Cotton-Eyed Joe just came into my head); but, you get my point.

All I’m saying is this: God loves people. And if we do too, we need to be aware of the ways they tend to relate to the world. After all, music is tribal. It can communicate acceptance or rejection – even if we never intended to communicate those things. So, allow your church to be generous with its experimentation – while holding a high bar for authenticity and talent too.

And remember: there will always be a person with the spirit of Michal to cut you down. I once had a pastor rip on me for celebrating DJs like I do. But, God’s opinion is the only one that matters. And it’s extra fun when newly saved people come alive – simply because they can use gifts that normally aren’t celebrated in church. Amen?

—
You can find Substance I.O. on iTunes, Google Play, and Spotify.