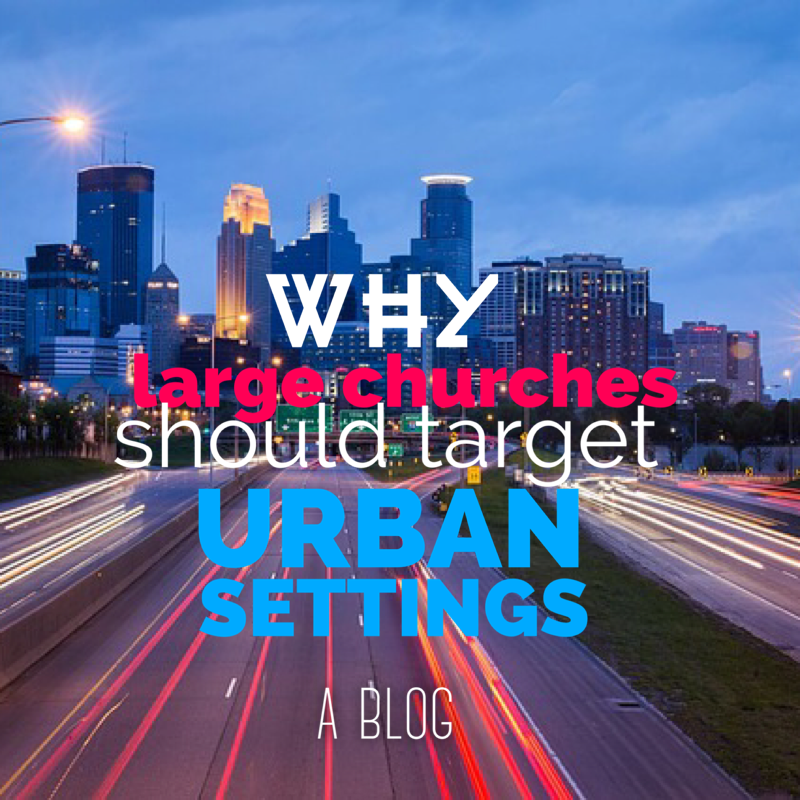 Every 4 to 7 days, Substance (through the Association of Related Churches) has the opportunity to help launch another church somewhere around the United States. Substance was ARC church plant #15. And since that time, I’ve watched the ARC launch over 500 new churches with a 93% success rate (after 5 yrs). So, over the years, I’ve had a front row seat to a lot of successes and struggles. And, one of the hardest places to plant is in the heart of a big city’s urban core.

Obviously, there are a lot of reasons for this: Traditionally, it’s been more expensive to plant in the city. The people you tend to reach are either poor, (or simply less likely to give or be interested in church). Lastly, permanent land is harder to get the deeper you go into the city. Zoning discrimination is rampant in urban cores. Thus, if a church doesn’t have a lot of money and legal firepower, it can be hard for churches to acquire property.

Thus, for much of the last 40 years, churches have been abandoning the urban cores of most cities. For example, in Minneapolis/St. Paul (where I live), over 78 notable churches moved out of the city to the suburbs! I don’t believe that most of them did it for ethnic reasons as much as financial ones. But trends like this aren’t limited to the Twin Cities. Indeed, most U.S. cities have their fastest growing churches on the outer rims.

So, for the remainder of this blog, I want to share the Substance story with you – why we had to leave the city (for a season); and why we’re now able to return to it. And out of this story, I hope it gives you a few insights about how you, (& your church) can play a powerful role in the spiritual history of your city – wherever that might be.

Substance actually started right next to the state fairgrounds at the University of Minnesota St. Paul. But, despite our strong start, over time, I noticed that we would constantly lose our families to the suburbs. Many of our families simply didn’t feel comfortable putting their kids into the floundering urban school districts. Even more, very few young families wanted to pay top dollar for ancient houses – when commuting could offer the best of both worlds.

So, month after month, I had to endure a constant exodus of dynamic families to the suburbs (which would constantly undercut our churches’ financial strength and discipleship capacity). Sometimes it felt like our church was the farm system that was filling all of the large suburban churches… which is fine; but, when it fundamentally undercuts our ability to run the “spiritual orphanage,” we knew we had a choice: We can become a homogenous niche-church (for college students); or, we had to fundamentally rethink how to be a “family church” deep in the city.

But, fast-forward a few years.

Eventually, Substance hit a facility lid. We couldn’t afford to buy property in the Saint Paul midway (and, even if we could, municipalities would stand against us almost every time). Thus, we knew we had to move; we were a bit too scared of multi-site at the time. And, after knocking on the doors of over 50 facilities, Fridley High school was the only viable option who would rent to us. The only problem was, Fridley was 18 minutes north of where we were currently meeting.

When we first made the move, we had to endure our share of accusations – that we were “abandoning the city” (as if we even had a choice). We probably lost 20% of our church in that move. This was one of those painful leadership moments where I had to choose between the “idealists” in our church and economic survival. To this day, very few people know how painful that decision was; but, looking back, no one would argue it was a bad one. Thankfully, the move preceeded our biggest growth year. We added close to 1000 people that year – over ½ of whom were totally unchurched AND from diverse ethnic backgrounds. And, on top of all this, our budget quadrupled as well. It was almost like our community found a healthy ethnic and financial diversity again.

Of course, Fridley wasn’t exactly “suburban soccer mom” territory… even though it was “the suburbs.” My daughters were some of the only native English speakers in their public pre-school classes – not to mention one of the few non-Muslims. In many ways, we realized that the suburbs can be FAR more diverse than the gentrified urban cores.

Looking back, I can see that God was setting us up to go back into the city through multisite methods – except, this time, we’d have the resources and numbers to pound open opportunities where few churches could. Not only do we have economic strength; but, we also have the size to create great kids ministry (which is sorely missing in many urban churches).
But allow me to give you 3 reasons why churches should consider going back into the city:

(1). Portable Church facility options in the urban core are far cheaper than I thought.
Part of it is because, there are generally 10 times the number of theaters / clubs and rental spaces in most urban cores; thus, for a church like ours, (that isn’t afraid of portability), it’s actually amazingly cost effective.
Of course, it can still be expensive if you’re comparing the costs to the outer perimeters of the city. But there’s always a price to reaching certain types of lost people.

(2). The Urban Core Needs Jesus like Never Before: As I mentioned earlier, in my city, over 78 urban churches relocated to the suburbs throughout the 70’s, 80’s and 90’s. And not surprisingly, guess who’s moved in? In the Twin cities, we now have over 40 mosques, 234 witch covens, and 747 occult/cult groups. Minneapolis / Saint Paul is now home to the largest neopagan population in the US – 4th largest number of Cult/Occult/ & world religious groups in the country. And stats like these aren’t native to the Twin Cities. But, it suffices to say, Christians have significantly lost the urban centers to other worldviews.
Unfortunately, many urban churches tend to be hostile towards outside churches coming in…which I suppose is nothing new. Whenever a pastor makes a decision to “face the city,” I always prepare them: “Your greatest persecution won’t come from Non-Christians but Christians.” And why?

Traditionally, urban churches were MORE diverse (theologically, financially, and ethnically); but, ironically, the trend towards diversity seems to be shifting. And, when any church gets homogenous, small, or ingrown, the Christians inside it can tend towards becoming theological or methodological elitists – which has given rise to the stereotypes of “Calvinist Hipster Churches” or the theologically obsessed “Missional” churches who barely grow (which is quite ironic when you think about it).

Unfortunately, there’s been an unnecessary and damaging trend in urban church planting that says, “Urban churches must be small & philosophical” which often translates into “ingrown & terrible at kids ministry” (the demographic who is ironically the MOST unchurched and most receptive in every urban setting).

The vast majority of urban unchurched people (at least the ones that I meet) have no interest in exploring theology or redeeming ancient church traditions. They’re just trying to stay married, or figure out why they feel so empty and sexually confused. Don’t get me wrong – I don’t want to come off harsh against ANY church in the city. Honestly, we need all hands on deck – ALL sizes and styles in the city who can reach ALL ages and styles of people. But don’t be surprised when you get resistance.

Thankfully, after Substance announced its intention to move deeper into the city, we’ve had many kingdom minded pastors give us a hearty welcome – which has been refreshing. Honestly, it feels like the tide is turning in Minneapolis. But all across the U.S., cities need way more churches with a simple gospel and a desire to celebrate any church who regularly exposes people to the power of God’s word.

As for the 3rd reason churches should reconsider the city…
(3). Large multi site churches are needed to take on the Legal Battles of the City: Right now, it’s next to impossible for a smaller churches to acquire a permanent property – unless they’re taking over an old church. Even then, many such churches are governed by historical societies that make it next to impossible to create family friendly facilities. City councils can be downright mafia-like when it comes to zoning for churches. Vary few city councils have any regard for the Federal zoning laws that protect churches (see RLUIPA) – unless they’re sued. Yet, very few churches have the financial bandwidth to take on such a fight – which sometimes go on for years.

All I know is this, in just a few short days, we will have over 1100 people launching a Substance campus in downtown. Our goal isn’t to “invade the downtown” – (as if there aren’t already good churches in downtown who are doing so.) Thankfully, most of our launch team already lives in or around downtown. And, our prayer is that we’d enhance and align with the spiritual atmosphere of downtown, not “be the saviors of it.”
The Lord knows we’ve got a lot to learn. And our hope is to lock arms with other awesome churches who are already succeeding in those efforts.
Also, our goal isn’t to create a “20-something Hipster Church” – after all, we believe that, for healthy discipleship to occur we need a diversity of ages. Thus, we purposefully held off in launch downtown for much of the last 7 years until we could guarantee we’d have the ability to create such an atmosphere.
Last, we have no illusions that this will suddenly make us more “ethnically diverse” – even though, that is still a huge goal and concern of mine. Over the years, Substance’s ethnic diversity has ebbed and flowed. We had a season when Substance was quite diverse (our staff was only 35% caucasian male). But, when you pastor a church of transient Millennials, plans can change quite fast! (It sometimes feels like our entire church turns over every 4 years – And part of this is a consequence of being a “portable millennial church”). But, “putting down roots” will be a game changer.

We ultimately believe our church should be even more diverse than our community. (And ironically, our new Northern Twin Cities campus is probably 10 times as likely to accomplish a diverse worship experience than our downtown campus.)
So then, why is Substance going downtown? It’s actually quite simple: (1). We already have a huge number of attendees who live there; and (2). there are more unchurched people within a 5 mile radius of our downtown than any other sector of our city. If we could plant one hundred 2000 member churches tomorrow…we would still only be reaching 50% of the unchurched pop within a five mile radius. And if God’s Word is true, that breaks God’s heart (see Luke 15).

No matter what city you’re in, give yourself to the mission of truly reaching lost people. There is nothing more revitalizing to my faith than having a front row seat to a brand new believer. In the end, when we align ourselves with heaven’s priorities, we will align ourselves with heaven’s provisions. And life is too short to miss out on the great harvest that is sitting in front of us.

Join us on November 1st as we officially kick off our two weekly services at our Downtown Minneapolis Campus!